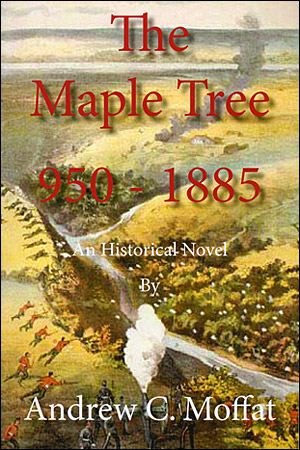 There are many aspects of our physical and mental being that may be attributed to a chain of genes. Whether ethics and morals can be attributed to a particular gene pattern is maybe questionable, but one can not question the fact that such trends tend to dominate in some families.

It is for the reader to decide as he reads through the history of this family whether there is really a thread of steel in the genetic material that has bound it and its loyalties together generation after generation.

How much is inborn; how much is learned through oral history; and how much is forced-learning by the social pressures of the times?

These are both question and answers, for there is little black-and-white in any of our personal histories: we are a blend. We are like fresh paint on the van Gogh painting on the wall… as stark as a colour may seem in any one spot, sooner or later it runs and blends into other colours to make the finished picture. So the character and personalities of one generation tend to blend into the next.

As different as we may seem on the outside, in the long run it is what’s inside that counts!

The ‘saints’ and the ‘black sheep’ carry the same genes although some force has caused them to exercise and display many of them differently. In a majority of cases the common bonds are clearly evident; in a minority it takes patience and detailed study to find those common threads… but they are there!

Although this is based on different branches of an actual family, there is no suggestion that they are unique, for it is really the story of many, many families in many, many countries… some ‘good guys’ and some not so good; but all faithfully following long family traditions of service.

The reader might well see a pattern in his or her own family.

He let out the softest whistle to attract the attention of the three men on forward sentry duty — a signal to ‘come in’ and join their Troops.

It was only fifteen minutes later that all Hell seemed to brake loose!

In the near distance were volleys of rifle fire and the unique chatter of the Gatling — a sound few of the Company had ever before heard.

Even at a half mile the hooting and hollering of Otter’s men could be heard clearly.

“Good Lord” thought Angus, “if that racket doesn’t scare the rebels into surrender I don’t know what will!

About the Author
OUT OF STOCK