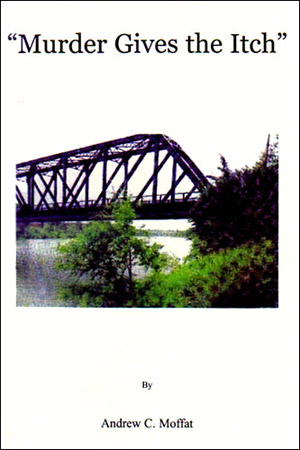 A fictional mystery story, based on an actual murder in 1934 of a Great Depression transient.

In 1935 the body of a transient is found, frozen in the ice and with its throat cut from ear to ear.

The story tells of the impact this has on the life of the 8-year old who found the body and his subsequent drive to identify both body and murderer.

Both boys dropped to their knees, bent forward until their faces were mere inches from the ice surface.

“It’s a man — I’m sure it’s a man! But he is so white… and look — it looks as though his neck has been cut from ear to ear! I remember reading in that Great War book of Gramps, how they would creep up on sentries from behind and cut their throats — Wow! It must have looked just like that!”

The boys were completely entranced by their find. It never entered their minds to run for help or to have someone call the Cops — that would only come after their fantasies and curiosities had been satisfied.

I thoroughly enjoyed this book. I liked your development of the attractive Johnny and Jan and, of course, I detected the hand of an authority when you were writing about the police, the Emergency Services, and the ME.