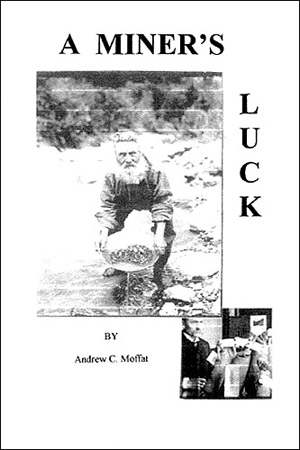 Sooner or later we all succumb to the idea that our lot in life is ruled by some force beyond our control — and beyond our ken as well. Our ‘lot’, our ‘fate’, ‘chance’, God’s will; it is called many things, but essentially it amounts to much the same thing… the path our life takes following on unusual and unpredictable instances or events.

The job we get by a chance meeting on a street corner; the girl we marry on an unplanned and even unwanted ‘Double Date’; the accident we have — or don’t have — because we slept in.

Boy’s life is like that, although he never thinks of it as chance — just that he is ‘lucky’. Finding gold; finding a perfect mate; becoming a noted rancher; one ‘success’ after another.

Even his tragedies — and there are some severe ones — seem to end up in lucky conclusions.

He (the young boy) crawled into the entrance of the collapsed cave; there was rubble everywhere. It was dark even with the morning sun shining across the entrance. There was a musty smell — the smell of fresh-turned earth.

He crawled forward with caution. He hadn’t gone far when he saw the way ahead was blocked. His eyes were gradually becoming accustomed to the semi-dark. Slowly he was able to identify specific objects — then he saw his father’s head.

“Dad… Dad… are you alright? Talk to me… say something… please!”

He crept forward cautiously, knowing in his mind what he was about to find, but denying it in his heart.

He put his head next to his father’s, listening for the sound of breathing, and hoping to feel even an infinitesimally faint breath against his cheek.