The Autobiography of Andrew C. Moffat 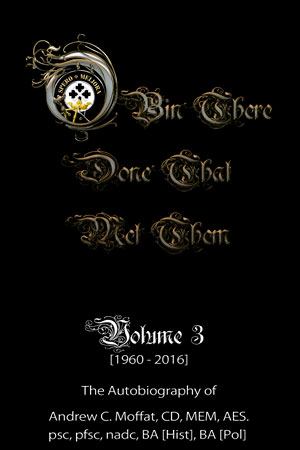 This starts with the most exciting, productive and enjoyable year of my service — the commissioning of the 1960 Officer Cadets.

It progresses through my three years as a Staff College DS, a tour at the NATO Defense College in Rome, Italy, to employment as Commanding Officer of Canada’s first and only nuclear Unit service in a Active Theatre.

The General was pontificating on how, in his superior opinion, it was impossible for an officer to wear a beard and still project the proper image of a Military Officer.

I happened to be passing the doorway of the Lounge at the time.

I apparently caught his eye and he called out in a loud and demanding voice,
“Isn’t that right, Monte; one can’t wear a beard and still present a proper military appearance!”

“Well Sir,” I replied in an equally loud voice — for all to hear, “It was the bearing of King George V that was my first inducement to join the Army”. The King had a very distinguished beard!