A Body is Missing in Action 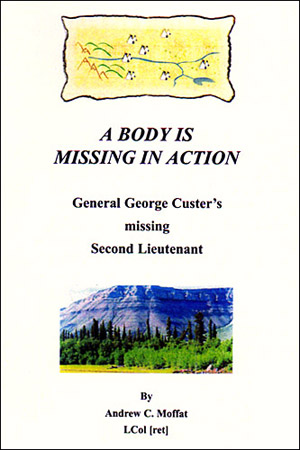 Following the Custer Massacre at the Little Bighorn, the bodies of 258 were recovered — three were not found. Although the bodies of three Second Lieutenants were never found, all were declared “assumed dead” and listed among the casualties.

Having made that assumption, those three were never looked for. This story, based on historical fact, is the second in which a reasonable story is contrived to explain what might have happened to those missing officers.

The first historical novel was entitled “The Price of Shame” and follows the life of one surviving Second Lieutenant and the effect the shame of his assumed ‘desertion’ had on his life.

It is the author’s intention to publish a third story about the third young missing officer.

“Do you remember striking that soldier with your sword when he was about to stab the child with his?

“The child you saved was the grandchild of Sitting Bull. With that simple act you created in Sitting Bull both a deep respect and a debt.

“When Gall and his braves were crossing the Little Bighorn ford, one of his braves recognized you and stopped the others from killing you — and our women from mutilating you, as they did the others.

“You were brought before Sitting Bull and he asked the Great Spirit to make you well. He told me that I must care for you and protect you, for the father of that child is dead and the mother must be your protector.”

This is an intriguing tale… it is a story that was woven in the past, looking at available evidence and facts in the present, and using clues surrounding a missing soldier of General Custer’s Army. An interesting tale of survival and tragedy from the start. It is hard to separate fact from fiction because it is so believable. It is a good read.